Abhay Deol joins the Advisory Board of 'Bandra Film Festival'

A Filmkaravan and Youtube collaboration, 'Bandra Film Festival' (BFF 2021) is proud to announce that renowned actor Abhay Deol has joined its Advisory Board.

A Filmkaravan and Youtube collaboration, 'Bandra Film Festival' (BFF 2021) is proud to announce that renowned actor Abhay Deol has joined its Advisory Board. Bandra Film Festival, is a platform to showcase films made by prolific filmmakers in the past years, emerging talent and innovative content creators.

The films can be viewed by all, on the Bandra Film Festival YouTube Channel, without any cost. Furthermore, the festival has tied up with Milaap to extend financial support to films and filmmakers in these challenging times. Discerning audiences can click ‘Milaap Donate Link’ set up alongside every title on this channel as well as on the BFF website.

Abhay Deol who along with Filmkaravan has produced the film What are the Odds? on Netflix, is elated to be on the Advisory Board of the Bandra Film Festival. Talking about it, Abhay said, "It has always been difficult for independent films and documentaries to reach out to the masses, even though things have evolved now in the content space with so many Digital and OTT players entering the market. I think the Bandra Film Festival will be a fabulous platform for independent filmmakers to showcase their work and reach out to a wide audience base. I am happy to be on board with Filmkaravan, who I believe have been pushing the envelope with a wide range of narratives. Their approach towards backing a good story and striving for inclusiveness is commendable. As for me, I have in my own way too tried backing the underdogs and the unconventional. "

He added, “BFF is striving towards an eco-system that enables growth not just in spirit but also in form. While the platform is designed to bring together a wide array of subjects from world over and give an opportunity to film makers to showcase their work but it will also work closely with Milaap to orchestrate a fundraiser, extending financial support to the makers. This to my mind is literally walking the talk and never explored before, atleast in the sub-continent”.

Pooja Kohli Taneja, co-founder, FilmKaravan, said, “We are thrilled to announce our first member of the Advisory Board for the Bandra FIlm Festival- Abhay Deol. Abhay is a very accomplished and creative individual, he has a keen eye for picking up talent. He will definitely add great value to this project and we are glad to have him support this endeavour.”

Given the on-going pandemic the board will schedule meetings virtually to not only select films but to also discuss certain strategies for the festival going forward.

The three broad categories in which the films will be slotted at the Bandra Film Festival are “Undiscovered Gems”- a category that will showcase films which were made ahead of their time, went unnoticed and eventually got buried, “Off The Beaten Path”- will enlist titles that are essentially experimental,unapologetic and non conforming and the third catergory is “New Discoveries”- will attempt to find fresh films, concepts, makers and delve deep into unravelling these coming of age titles.

Film submissions to BFF 2021 are open currently to all formats of features, documentaries, shorts, animation etc. from all parts of India and the world. Filmmakers can contact the festival through its official website www.bandrafilmfestival.com 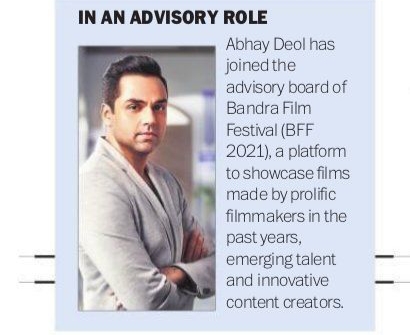